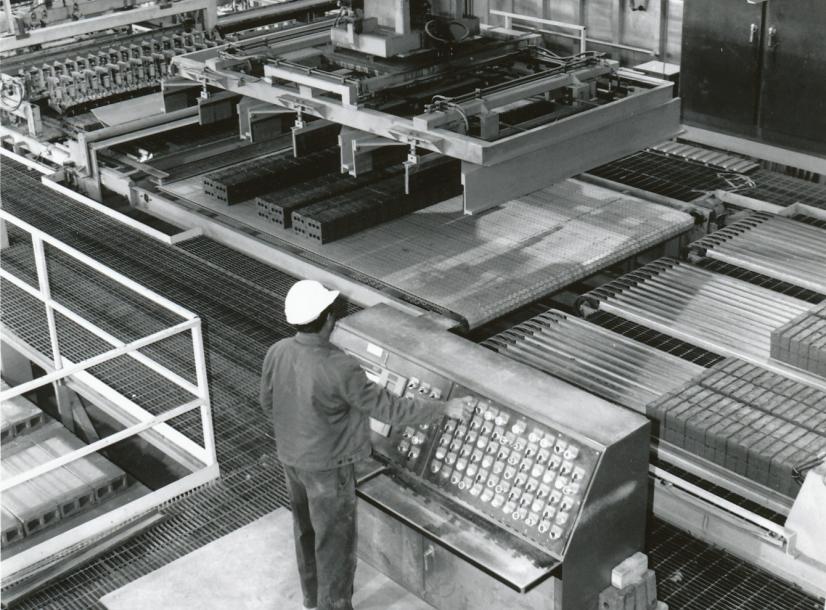 1959 - Triangle Brick Company was incorporated by three veterans of the brick industry in North Carolina.

1960 - The original manufacturing facility, with a capacity of 25 million bricks a year, opens on Highway 55 on the southern edge of Durham.

1968 - Triangle Brick is one of the first brick companies in the US to completely automate the manufacturing process.

1973 - A second plant opens in Carpenter near the Durham-Wake County line, two miles from the original plant. Total capacity increases to 105 million bricks.

1991 - A new plant, with an annual capacity of 50 million bricks, opens at Merry Oaks on the Wake-Chatham County line.

Early 1990s - The Merry Oaks manufacturing facility is regarded as the most technologically advanced in the industry, using automation and computerization to improve the way brick is crafted, fired, inspected and delivered. Meanwhile, the original Durham plants are phased out of operation.

1999 - The second plant at Merry Oaks opens with an additional capacity of 100 million bricks a year. The company’s total production capacity reaches 240 million. The new plant has one of the largest kilns ever built in the US, and two of the world’s highest capacity industrial robots are used in dehacking and packaging.

2000 - At the turn of the century, 40 years after beginning operation, the company is selling bricks to customers in over 30 states and Canada. The majority of Triangle Brick products continue to be bought and used in North Carolina.

2001 - A new plant, with an annual capacity of 110 million bricks per year opens in Wadesboro, NC in Anson County. With the opening of this plant, the company becomes the fastest-growing brick manufacturer in the country. By mid-year, the new plant is at capacity, and all production is sold as it comes off the line. Triangle Brick’s Half Pack™ Technology is also introduced.

2004 - Construction is completed and production starts at the second plant at Wadesboro.

2014 - Construction begins on our Clay County Plant in Henrietta, Texas.

2016 - Construction is completed and production starts at the Clay County Plant in Henrietta, Texas.  This new plant adds an additional production capacity of 100 million standard brick equivalents per year to the company's total production capabilities.

Whether you're a homeowner, mason, contractor or anything in between, make Triangle Brick Company your comprehensive resource for all things brick. Explore the links below to learn more about working with brick — and working with us.